This is my third year in a CSA, and I don’t know about you, but the first few weeks of the season are the hardest for me.  All those leafy salad greens… lettuce mix, arugula, Boston lettuces every week!  Don’t get me wrong – I like salad as much as the next girl – but it can get really tiring after a while.

I like a lot of texture to my salads.  So in the early part of the season, if I notice I’ll be getting lettuce mix, or a head of lettuce, I might go to the store and pick up a head of red cabbage, which isn’t bitter and adds a ton of crunch to any salad when you chop it.  It also lasts a long time, so it’ll work for a few weeks of your salads. 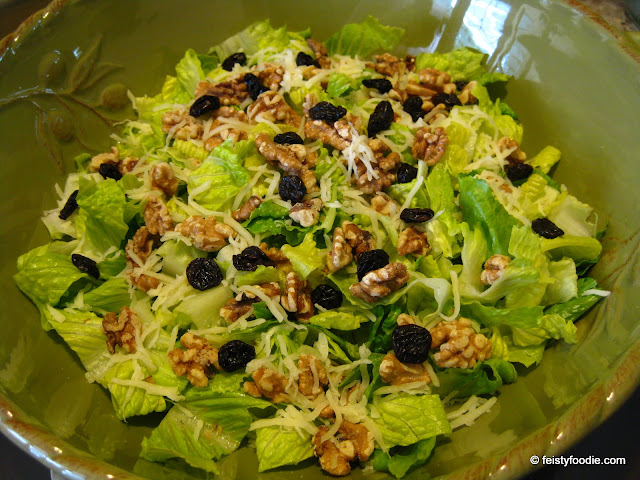 Fluff out a salad with pasta added on top – I like to make ziti or penne, or any of the small tube pastas, and toss lightly with a bit of pesto, diced chicken, tomatoes, even zucchinis as we get those.   Then I fill a medium sized mixing bowl a little more than halfway with washed/chopped lettuce/lettuce mix, and top it with about a cup of the pasta salad, maybe a touch more pesto (be careful with pesto too – there’s a lot of oil in there), and then I use my salad tongs and toss them all together to mix it up.  Sometimes I get lazy and eat it right out of the mixing bowl, but regardless of whether you then plate it or not, it really helps fill you up and makes the greens less like eating a salad.

For arugula, which is very peppery, a nice quick lemony pasta dish – cook spaghetti in one pot, and melt butter in a skillet a few minutes before the pasta will be done.  Add a clove or two of minced garlic, and as the spaghetti finishes cooking, remove it with a pasta scoop into the skillet.  Toss in the butter mixture, turn off the flame, then toss in a handful or three of arugula, tossing it together to wilt the arugula.  Squirt the juice of one lemon over the entire thing, and enjoy.  Serve with shredded parmesan if you like, but it doesn’t really need it.  Sometimes I throw in some red pepper flakes along with the garlic to give it a little heat, or a small handful of breadcrumbs for some extra crunch.

There are lots of ways to jazz up a salad to make it seem less like eating the same salad every day – these are just a few tips!  Feel free to share in the comments how you make your salads more fun!